Xanthomonas citri is the ethiological agent of citrus canker, one of the most economically relevant diseases affecting citrus cultivars around the world. Once a plant is contaminated, there is no cure and the only method to avoid the bacteria dissemination is the cutting of hundred plants around. Since ABC transporters are essencial proteins involved in many processes that include nutrition, infection, pathogenesis and drug resistance, we think they are interesting targets for the development of drugs for growth inhibition. Structurally, they consist of 2 membrane-spanning proteins that form a pore, 2 ATPases that generates energy for the transport and in case of importers, a periplasmic protein that is responsible for the affinity and specificity. We have identified at least 87 ABC transporters type importers and 32 exporters in X. citri genome, as well as, demonstrated the importance of the molybdate, oligopeptides, phosphate, nitrate and alkanesulfonate transporters for bacterial growth and pathogenesis. To characterize all the transporters that are expressed during the plant infection, we have used mass spectroscopy and proteomic analyses associated to the induction of the GFP expression controlled by different ABC transporter promoters.

The Phosphate Specific Transport (Pst) is an ATP-Binding Cassette transporter that along with the Two-Component Regulatory System (TCRS) PhoR-PhoB are respectively responsible for phosphate uptake and sensing in Escherichia coli and other bacteria. Both systems belong to the Pho regulon and their interaction is mediated by PhoU, a protein that plays a role of negative regulator through the formation of a repressor complex. We want to characterise the mechanism of regulation that involves both systems and what are the structural changes triggered by PhoU in low and high levels of phosphate. Moreover, we are interested in to understand the role of phosphate-binding protein PhoX and PstS in the transport, biofilm formation, adhesion and quorum-sensing. One important component in this process is PhoB, the transcription factor 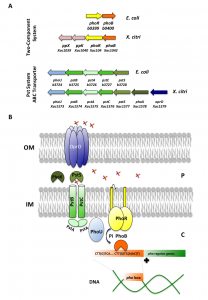 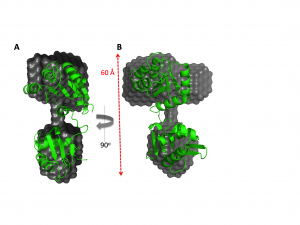 Structure and function of periplasmic-binding proteins of Xanthomonas citri

The periplasmic-binding proteins are the first component of ABC transporters type importers, responsible for affinity and specificity of the systems. Structurally they consist of two domains connected by a hinge that that open and close for the ligand binding. Indeed, these proteins are responsible to delivery the ligands to the membrane proteins of the transporter. During the association of periplasmic and permeases, conformational changes induce the break of ATP by the ATPses in the cytoplasm. Deletion of these proteins often block the transport or highly affect it. Our group is interested in determinate the importance of periplasmic-binding proteins from different ABC transporters belonging to X. citri to use them as target for the development of drugs and inhibitors of the bacterium. Using circular dichroism, fluorescence, molecular dynamics, molecular modelling, crystallography and functional assays, we have characterized the maltose, molybdate, alkanesulfonate, oligopeptide, putrescine and other periplasmic-binding proteins that showed to be important to the development of the canker disease. 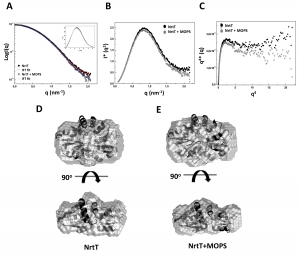 Sulfur metabolism in Mycobacterium tuberculosis as target for development of drugs

Tuberculosis (TB), caused by Mycobacterium tuberculosis, is responsible for approximately 2 million deaths per year and remains a major global health challenge. The identification of new antibacterial targets is urgently needed to address multidrug resistant and latent tuberculosis infection. Sulfur metabolic pathways have been shown to be essential for many biological processes, including survival and the expression of virulence in M. tuberculosis. In addition, the uniqueness of microbial sulfur metabolic pathways and absence of orthologs in human suggest they are excellent targets for therapeutic intervention. After assimilation by an ATP Binding Cassete (ABC) transporter, six enzymes are responsible for oxidation of sulfate (SO42-) to sulfide (S2-), a form of sulfur used for the biosynthesis of sulfur-containing metabolites. We are trying to characterize enzymes in the sulfur metabolic pathway of M. tuberculosis by X-ray crystallography and use fragment-based drug discovery methods to identify low molecular weight hit compounds that will then be developed to high potency lead molecules for the treatment of TB.

The mechanistic of the ABC transporter Rv1747

Rv 1747 transporter is encoded by the Rv1747 gene and has no substrate known. Previously studies suggest its participation in the translocation of bacterial cell wall components, possibly lipooligosaccharides or PIMs (Phosphatidyl-myo-inositol-manossides), and antibiotic extrusion. Viability studies have shown that while the transporter is not essential for bacterial growth in vitro, its absence significantly decreases M. tuberculosis growth in in vivo assays on bone marrow-derived macrophages and dendritic cells. Rv1747 presents a non classical architecture of ABC transporter, where besides the previously described transmembranes (TM) and Nucleotide-Binding Domains domains (NBD), it exposes two cytoplasmic Forkhead-Associate domains (FHA),  whose function in other systems is  related to the recognition of phosphopeptides. The interaction between theses domains and the PknF kinase regulates the transporter activity. We are interested in determinate the structure of this transporter and how the kinase interaction induces the structural changes in FHA domains. We also want to characterise the effects of Rv1747 inhibition in the bacillus growth and infection. 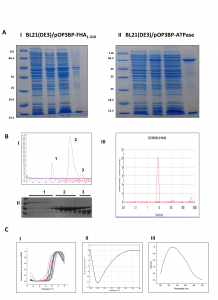